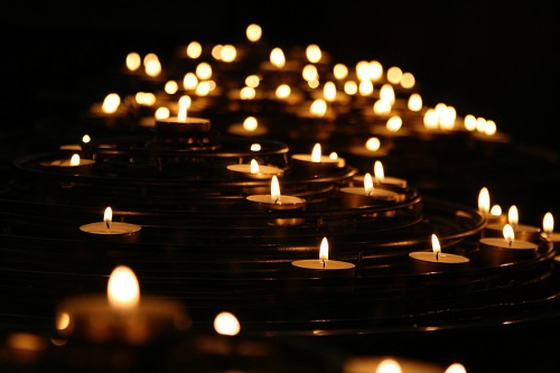 I once visited St Paul’s Cathedral in London during the week.  Tourists wandered around the monuments.  It was more like a neglected museum than a place of worship, mystery or celebration.  ‘One day,’ I thought ‘there will be a notice here explaining that, long ago, people used to come here for religious rites . . .’.

A few years later, the annual New Year Taizé Youth Gathering was held there.  Large crowds of young people were moving up the steps.  At the top, other young people held up hand-written signs with ‘Silence’ on them.  Inside, the nave was filled with young people, quietly sitting on the floor.  At the side, a music group were singing beautiful, haunting chants that they repeated again and again, with different instruments and voices soaring up and around the simple chant melodies.  At the front and in the centre, a group of the monks from Taizé, in France, were also sitting on the floor, in their white habits, facing the large, painted cross-icon.  When it was due to start, we were invited to sing the first chant, and slowly, hesitantly and then with confidence as we got going, the whole crowd of us sang the chant, over and over.  There were pauses, some brief readings from the Gospels, more chants, a more lengthy time of silence.  With so many people just sitting in silence, and the chanting rising from that silence, we were led into a very special space of beauty and stillness.

Prayer did not feel forced but the most natural way to express one’s deepest yearnings and to feel at ease, no longer alone.

Since then, I’ve joined in smaller versions of that service, on Iona and in different churches.  Most recently, since my first wife died, I have found the regular Taizé prayer services, in different churches around Ewyas Harold and at Hoarwithy, to be a place to rest and feel held, able to remember and grieve, and find myself touched and, sometimes, challenged, in the most gentle way possible.  In all the churches, the evening light gentles us into the silence.  Most special of all, in the summer months, we meet in the medieval monastic setting of Dore Abbey; this links us to the prayer of others over long centuries, so that we find that praying is both ancient and timeless and very real in the present.